Discoveries and Synthesis of Research Conducted on the Breton Classical Plots

The earliest agricultural settlement in the prairie or parkland belts of Canada occurred on Chernozemic soils, and Brown and Black Solonetzic soils. As arable agriculture spread westwards, early settlers wanted to use the cleared, wooded lands for arable agriculture. However, they had very little experience with arable agriculture and almost no information about Gray Luvisolic soils which occur in wooded areas. Within a period of few years, they found that these soils had severe problems for crop production.

Gray Luvisolic soils have a thin A horizon which has a slightly acidic reaction (pH 6.0 to 6.5), low organic C content (10 to 20 g kg-1) and nutrient supplying capacity. The A horizons often develop poor tilth when cultivated. Most soil related problems such as crusting, low water holding capacity, low fertility, and low buffering capacity against pH change arise from the low organic matter content of the A horizon. Impeded water transmission and restricted root growth arise from the presence of a dense, very firm and acidic B horizon. Problems in managing these soils were recognized early, and in 1929 Dr. F. A. Wyatt and Dr. J. D. Newton established plots on Gray Luvisols at Breton, Alberta and started crop rotation studies in 1930.

Over the past 70 years, research on these plots has conducted in the following areas:

The image above shows wheat yields following clover crops in 1931.
From left to right the fertilizer treatments were; 0 = none, M = manure, CF = NPKS, N = NS, L = lime, LP = lime and phosphorus, P = phosphorus as treble superphosphate, MP = manure and phosphorus, NP = NPS. Note that sulphur is not shown in the fertilizer designations although it was a major component in plots labelled CF, N, NP and M. 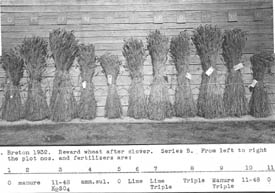 Above are loaves from wheat grown in 1938 following legumes in 1937. Loaves from plots 3, 4 and 10, all receiving sulphur fertilizer, were distinctly superior to the one from the check plot. These results suggested that sulphur fertilizer added to this sulphur deficient soils, changed the quality of the wheat protein. 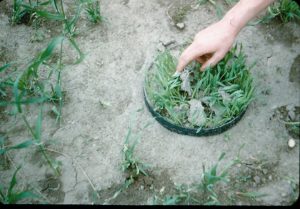 Soil organic (carbon) content has been affected by management practices. There is more organic matter in the plots of the five year rotation than in those of the wheat-fallow rotation. Also, there is generally more organic matter in fertilized plots than in control plots because plots receiving manure and fertilizer have greater crop yields and below-ground organic carbon in form of roots and root derived materials. Also, manure application adds large amounts of organic matter to soil. 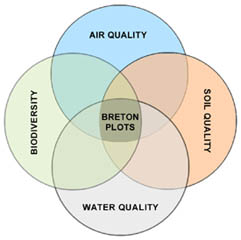 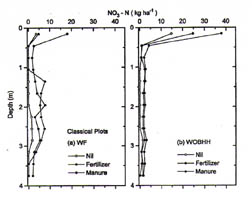 Nitrate accumulation in the wheat-fallow and wheat-oat-barley-hay-hay rotations ranged from 0 to 67 kg N/ha. The WOBHH rotation tended to store more NO3-N in the rooting zone, and less below the rooting zone compared to the WF rotation.

Emissions of greenhouse gases (N2O and CO2) have been quantified on cropping systems at Breton. With some practices, an additional 10 tonnes per hectare or more of carbon may be stored in soil. This is one of the methods of removing CO2 from the atmosphere.

5. Assessing Local and Global Impacts (2000 and Beyond)

We must now focus on how that information will help farmers and society in the future. Here are examples of future research thrusts:

The Breton Plots are a living library of information about interactions among crops, soils and the environment and enable researchers to assess the impact of management on soil, air and water quality and biodiversity in the future.