Celebrating Over 90 Years of Research and Outreach (1929-present)

The Breton Classical Plots were established in 1929 near the village of Breton, 100 km southwest of Edmonton, by the Department of Soils, University of Alberta. These plots were originally designed to find 'a system of farming suitable for the wooded soil belt'. Today, the Breton Plots provide a model of how diverse cropping practices affect typical Gray Luvisolic soils.

The Breton Classical Plots are the only continuous, long-term plots on Gray Luvisols in Canada and possibly in the world. Many farmers and rural communities have benefited from the work done over the past 78 years. Currently, the plots are being used to assess the interaction among global environment, crop productivity and soil quality. The Breton Plots are a part of the North American Great Plains Network and the Global Change and Terrestrial Environment Soil Organic Matter Network.

The plots are managed by the Department of Renewable Resources, Faculty of Agricultural, Life and Environmental Sciences, University of Alberta with full participation of the Agronomy Unit and the Conservation and Development Branch, Alberta Agriculture, Food and Rural Development, Edmonton. The Plots exist today due to the vision of Dr. F. A. Wyatt and Dr. J. D. Newton, the dedication of a large number of individuals, and the financial support from the Breton Plots Endowment Fund, Industry, National and Provincial Granting Agencies, and the Department of Renewable Resources, University of Alberta.

This section of the website contains a list of research productivity and outreach activities at the Breton Classical Plots. Tangible achievements include development of highly qualified personnel and a scientific publication record in agronomy, soil science and agroecosystem management for enhancing carbon sequestration and reducing greenhouse gas production. The Breton Plots started locally in 1929 to solve practical farming problems. Currently, the plots are being used to study the interactions of crop productivity, soil quality and the environment. The data from the plots are part of larger networks, thus these plots have become a global resource.

The Breton Plots are on Gray Luvisolic (Gray Wooded) soils. Such soils are difficult to manage because they are low in organic matter, have poor physical properties, are moderately acidic and are low in several plant nutrients. The Gray Luvisolic soils occur in the northern interior plains of Manitoba, Saskatchewan, and Alberta. The largest area occurs in Alberta (20 million hectares), of which about 5.7 million hectares are potentially arable. They are the dominant soils in much of the "potentially arable" parts of Alberta and also occur widely in northern British Columbia, Saskatchewan, and Manitoba. Research from the Breton Plots has led to an increase in the productivity of these soils.

The Breton Plots are a living library containing much information about how management practices have affected soils and crops. Some of the information has been uncovered in past research; much awaits to be discovered by future researchers. 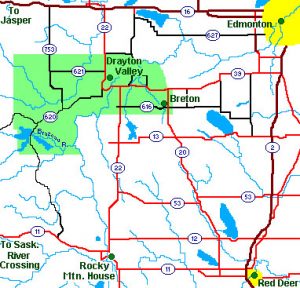 The village of Breton is located on Highway 20 and secondary Highway 616. The Plots are located 1.6 km east of Breton on secondary 616 and 1.6 km south on Range Road 40. The Breton Plots are 58 km southeast of Drayton Valley, and 108 km from Edmonton.

For more information on Breton and the surrounding area, please visit the following sites

A Research Site for Several Medium and Long-Term Field Experiments